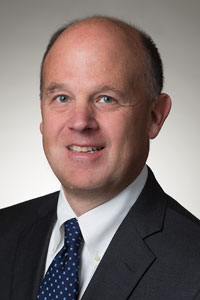 Getting to Know Richard Jones
Richard R. Jones began his term as the eighth chair of the Financial Accounting Standards Board (FASB) on July 1, 2020.  In this role, Mr. Jones heads up the seven-member board that establishes generally accepted accounting principles (GAAP) for public companies, private companies and nongovernmental not-for-profit organizations in the United States. His term concludes on June 30, 2027.

Mr. Jones brings to his position with the FASB deep technical accounting experience obtained over more than three decades with Ernst & Young (EY). An experienced leader, he has a proven track record for driving consensus in the complex world of accounting standards and financial reporting.

Prior to his appointment to the FASB, Mr. Jones was a Partner at EY and served as the firm’s chief accountant, leading a large and diverse team of professional colleagues in the firm’s national office.  In that role, he directed efforts to help the firm’s clients and engagement teams understand accounting requirements and developed the firm’s views on proposed accounting standards. Mr. Jones also oversaw EY’s accounting publication efforts across all sectors: public companies, private companies, not-for-profit organizations, employee benefit plans, and government entities. He also authored numerous EY technical publications.

During his career, Mr. Jones served on the Financial Accounting Standards Advisory Council (FASAC) from 2016 to 2018.  He was also a member of the Accounting Standards Executive Committee of the American Institute of Certified Public Accountants (AICPA) from 2003–2008.

Mr. Jones graduated with a Bachelor of Science degree in accounting from the State University of New York, Binghamton, in 1987. He is a certified public accountant in the state of New York.